I close my eyes and I can see
The world that’s waiting up for me
That I call my own
Through the dark, through the door
Through where no one’s been before
But it feels like home

For the world we’re gonna make 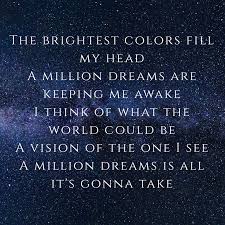 1. What does the title of the song tell you it is about?

The song title is a “A Million Dreams” – what it says to me is that someone has spent some time dreaming for sometime or even a million times over for the life or the being that they want for themselves.

2. Read or listen to the song quietly. What is happening?

When I listen to the song “A Million Dreams”… I hear the love and passion of uncharted territory… the long of a love that has lived its presence in million long dreams of a heart longing touch.

I hear the youth of a new love showing its maturity in the yearn for the unknown hold that love installs in the hearts of every single person or every single soul that has ever love anyone in a far greater capacity then he or she has ever loved another.

A Million Dreams is a vivid song that flutters colours and euphoria in the love that is seen in those million dreams… sing breath, belief and reality into a world that is yearning to be real.

3. What is your first impression of the song? My impression of the “A Million Dreams” is the very feeling that reminds me of the love that I felt when My Dreams of loving my husband in the flesh and not in the dreams and wants that I had for him.

Our wedding song by Savage Garden – I Knew I Loved You talks about my exact feeling and connection that I had for some years before Steve and I actually became one.

There’s just no rhyme or reason
Only the sense of completion
And in your eyes, I see
The missing pieces I’m searching for
I think I’ve found my way home
I know that it might sound
More than a little crazy
But I believe

I understand the euphoria that the song A Million Dreams
Conveys…

A thousand angels dance around you
I am complete now that I’ve found you
Is how my story started… my story & its reality, beautiful colours fade away the world and the people around you when you find reality in the dreams that colour the world of love that fills the world and hearts of two finding love for the very first time.

4. Now read the song a second time. Notice how it is punctuated. Do any images
stand out to you?

The image that comes to me is a prom dance night, the lSt dance of the evening where nothing exists but the music and the lights flickering the colours of the falling glitter and confetti into the euphoria that exists when two hearts find each other.

5. Is there a rhyming pattern? What is it? Is there a noticeable rhythm to the words?

Deeply felt is love in yearning that it has a noticeable heart beat that beating fast in the story the song A Million Dreams sings.

6. Is there an obvious meaning to the song?

Yes absolutely there is an obvious meaning to A Million Dreams… and sing so beautifully of its expectations of a love that is dreamed of over and over again, soon to be live in reality that will soon breathe life into its world & words.

7. Is there an implied meaning?

The implied meaning is known “A Million Dreams” all of the same story.. the deep and burning yearn for the vivid love that ones heart dreams of; over and over again.

Written by Benj Pasek and Justin Paul for The Greatest Showman soundtrack, “A Million Dreams” is sung by the young P. T. Barnum (Ziv Zaifman) to his future wife Charity Hallett (Michelle Williams). He tells her of his dreams for the future and explains his confidence that if they work hard for it, they will come true.

“We wanted to show a couple of things. One, that this flame of a dreamer that is Barnum always has a vision. He always wanted life to be larger and colorful than it was. We wanted to show that’s the kind of thing that ran through the character from when he was a kid to being an adult.

But for the story, we thought it would also be interesting and ironic that he expresses this dream as a kid and when we meet Hugh Jackman as an adult now. He still has that same dream and he still hasn’t found that thing. He still hasn’t built the house, so to speak. He hasn’t been good on the promise he makes to himself and Charity. So that dream is kept alive.”

This was the first tune that Pasek and Paul wrote for The Greatest Showman and it served as their audition for The Greatest Showman. However, nothing was assured. “Every song in the movie we wrote in a competitive way, because we were never hired as the songwriters for the movie,” Pasek told Billboard. “We had to submit a song for each song moment.”

PRE-CHORUS
The people around him think he is losing his mind for dreaming of such. Yet despite this opposition he is committed to achieving a reality based on his fantasy. Indeed he can’t sleep at night due to nagging yet wonderful imaginings of a reality he feels he and his fellow believers are able to create.

VERSE 2
The second verse then gets more specific in identifying that the song is indeed about a particular person. As such we get a gander of what it is he is actually conceptualizing, which are exotic items that bring joy to peoples’ lives, even on depressing days. Likewise the business P. T. Barnum was engaged in was circuses.

CHORUS
The subject of the song then switches from a young P. T. Barnum into his adult form. Yet once again he is expressing the same sentiments as in the pre-chorus. In other words, the adult P. T. Barnum possesses the same colorful aspirations that he had as a youth.

BRIDGE
During the bridge, P. T. Barnum’s wife, Charity, joins him in singing. She expresses that she shares his vision and is there to support him throughout his journey to make it come true. He relays the same sentiment to her.

OUTRO
The song concludes on the note that P.T. and Charity are indeed actively engaged in creating “the world” that they both dream of.

Quick Facts about “A Million Dreams”

This song was performed by actors Ziv Zaifman, Hugh Jackman and Michelle Williams. These stars, including Jackman, actually sang this song.

Songwriters Justin Paul, Joseph Trapanese and Alex Lacamoire are credited with composing this track.
“A Million Dreams” was produced by Benj Pasek and all three of the song’s writers.

My Interpretation Of “A Million Dreams” 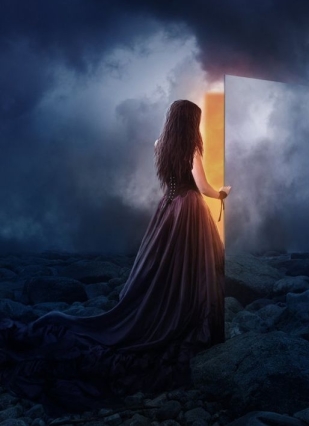 Silence encircles
No words are needed in exchange

Those dreams of you
Were once so vivid
Now I feel your breath breathing with mine
Cradled in arms
And hearts deeply entwined
You are my world
And my only one.

You are the million dreams
I no longer dream
For you are the unfolding of was once just a dream.

I love this song that has me writing about it in my today’s writings… it takes me right back to the day when my hubby Steve became real flesh and blood, the touch and feel of a person that I had met some 3 years on three separate before. 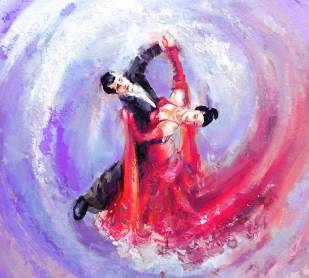 You Are My Best Friend,
My Sense Of Completion
The Missing Pieces That I Was Searching For
We Both Complete
Now That We Are One.

& again talked about my euphoria of love for my hubby Steve in my writing dated:- October 27th, 2000 – Here’s To Our 18th Wedding Anniversary October, Saturday 28th, 2000 where I wrote the following:-

Through the sands of time, Many days went by But I never let go of your picture in my mind. I promised myself that I would someday find you Reconnect with you And make you mine.

You’ve always been hidden Far back in my subconscious But every now and then There would be a whispered word Nudging me telling me that you are never far That someday soon; You will materialise and become forever mine.

There was a time in those years Where I gained a glimpse of you But the mesmeric fields of love Never aligned us on the same path.

Your name was heard In the traps of other peoples words… And just as I accepted That our love may never to be; Like a genie in the wind, You appeared in the flesh And there you were in front of me.

A stolen kiss from a stranger in person But in my dreams, this certainly wasn’t our first. Then it came That you become mine Loving you always And far more than one lifetime should allow.

5 thoughts on “Song Appreciation – “The Greatest Showman – A Million Dreams””